This article was first published on April 22th 2015 on Project Syndicate.

Healthy soils are crucial to human nutrition and the fight against hunger. But worldwide 24 billion tons of fertile soil is lost annually. Barbara Unmüßig calls attention to the growing threat to one of Earth’s most important resources.

The United Nations has declared 2015 to be the International Year of Soils, and April 19-23 marks this year’s Global Soil Week. Such events, though not exactly glamorous, do not receive nearly the amount of attention they deserve.

Intact soils are an invaluable and irreplaceable resource, one that performs myriad functions in achieving the international community’s main development and environmental goals. And now they are in urgent need of protection.

Healthy soils are crucial to human nutrition and the fight against hunger. We rely on them not only for food production, but also to create new drinking water. They help to regulate Earth’s climate, storing more carbon than all of the world’s forests combined (only the oceans are a larger carbon sink), and are essential to maintaining biodiversity: a handful of fertile soil contains more microorganisms than there are humans on the planet. Two-thirds of Earth’s species live beneath its surface.

The loss of fertile soil

But erosion and contamination are placing soils under severe stress. Worldwide, 24 billion tons of fertile soil is lost annually, partly owing to the growth of cities and infrastructure. In Germany alone, construction projects claim an average of more than 75 hectares per day. Inappropriate agricultural practices are also to blame: the liberal use of synthetic fertilizer, for example, decimates organisms inhabiting the soil and changes its structure. It takes millennia for fertile topsoil to form; in many places, a cloudburst is now all it takes to wash it away.

At the same time, global demand for food, fodder, and biomass for fuels is growing, in turn driving up the value of land – a fact that has not escaped international investors’ attention. According to a World Bank estimate, 10-30% of arable land worldwide – land that would be used by millions of smallholders, pastoralists, and indigenous people – has been affected by large-scale investment.

The struggle to secure land rights for individuals and communities has thus become a matter of survival in much of the world. Access to land is one of the key determinants of hunger, and it is even more unequally distributed than income. Some 20% of households affected by hunger are landless, and 50% of food-stressed households are smallholder families.

In Europe, we have long since outgrown our domestic agricultural land, so now we “import” it on a grand scale from the global South. Just producing the fodder needed to cover the European Union’s meat consumption requires an area of agricultural land in Brazil the size of the United Kingdom. If every human ate as much meat as the average EU citizen, 80% of the world’s arable land would have to be dedicated to producing it, compared to 33% currently. And let us be clear: given that 100 calories of fodder produce at most 30 calories of meat, using fertile land for this purpose is sheer waste.

This trend will be exacerbated to the extent that the “green growth” that many governments are promising relies on biofuels to replace fossil fuels like oil and coal. Biofuels do not benefit the climate nearly as much as wind or solar energy systems, yielding only one-tenth the energy per square meter. As a result, the biofuel requirements contained in the EU’s 2030 Framework for Climate and Energy would need a further 70 million hectares of land – an area larger than France.

Destruction of the topsoil

One approach, so-called agro-ecology, is based on small farmers’ traditional knowledge and experience, making it readily adaptable to local conditions. A study of agro-ecological farming practices by Jules Pretty in 2006 examined 286 sustainable agricultural projects in 57 countries and concluded that yields had increased an average of 79%.

Despite the proven success of such methods, the use of synthetic fertilizers has increased by a factor of more than five over the past 50 years, and many African governments spend up to 60% of their agricultural budgets to subsidize them. Particularly in tropical environments, such products lead to the destruction of the topsoil and biodiversity loss (and the runoff is transported to the oceans, where it damages marine ecosystems). And, though their main component, nitrogen, could be produced biologically and sustainably, that would run counter to the interests of a handful of powerful fertilizer producers and distributors.

Policymakers must address the following question: How can poor people produce enough food to escape hunger and destitution in a manner that protects soils, mitigates climate change, and preserves biodiversity?

Despite the issue’s urgency, approaches like agro-ecological production are not being promoted to any serious extent anywhere. Events like the International Year of Soils and Global Soil Week offer an opportunity to change that – from the ground up.

To read more about the threat to soil and why soil should concern us all, check out our Soil Atlas. 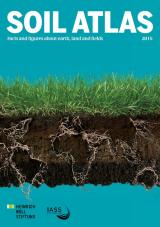 Soil Atlas: Facts and figures about earth, land and fields

Through misuse, we lose 24 billion tonnes of fertile soil every year. For the International Year of Soils in 2015, this Atlas shows, why the soil should concern us all. Jointly published by the Heinrich Böll Foundation and the Institute for Advanced Sustainability Studies.