Key points of analysis by constituents of Vikalp Sangam*

This analysis looks at the environmental implications of India’s Union Budget 2022-23 in three dimensions:

Overall, the picture is bleak. There are some welcome allocations and indications of shifts in thinking (e.g. in agriculture and climate). However, overall, environment continues to be a ‘sideshow’ – it is given a few token sops, while in fact financial allocations continue to fuel an economy that is fundamentally unsustainable. The country’s natural resource base will continue to be devastated, especially by the massive increases in mega-infrastructure. There are some positive allocations towards tackling the climate crisis, but almost no direction towards building resilience, adaptation and mitigation for the sake of hundreds of millions of people already impacted and likely to be impacted by it. Air pollution, a national emergency, continues to be neglected.

A search of the Finance Minister’s Budget speech for the following words is revealing in itself: nature, wildlife, environment, ecology, ecosystem, pollution, conservation. Total occurrence of these words: ZERO (except in uses such as ‘business environment’ and ‘growth ecosystem’).

Another chance to turn the economy towards real sustainability has been missed.

• There is a slight increase (easily wiped out by inflation) in the budget of the Ministry for Environment, Forests and Climate Change, from 2021-22 Revised Estimate of Rs. 2870 crores to 3030 crores.

• This is a meagre 0.08% of the total budgetary outlay; for the last many years, the share of allocation has been consistently going down, which is an indication of how serious the govt. considers environmental issues.
• Air pollution, which is a national emergency as it kills or seriously injures millions of people, has seen reduced allocation.

• Environment/forestry/wildlife sector has got an increase of over 30%. However, this too will be more than offset by the likely damage caused by the significant outlays for infrastructure, river linking and other such sectors (see below). 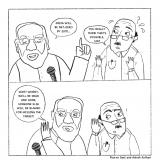 • There is no focus on risk reduction, building resilience, supporting adaptation, preparing for disasters, and other measures that are urgently and desperately needed by hundreds of millions of people to deal with the impacts of climate change. The National Climate Action Plan gets only Rs. 30 crores, which is not even an increase over 2021-22, and is abysmally inadequate for what needs to be done. There is no focus on a ‘just transition’ in which workers in fossil fuel sectors, like coal, are reskilled to get alternative employment as these fuels are reduced (assuming there is any real intention to reduce them in the long run!).

• The National River Conservation Plan, now under ‘Other Basins’, has been reduced to about half of the 2021-22 Revised Estimate (from Rs. 450 crores to 235 crores).

• There is as yet no focus on green accounting, or of sectoral environmental assessments that could give an idea of the overall environmental impact of each economic sector, enabling mechanisms to integrate sustainability as a core feature.

2. Indirect allocations for Environment (to bring in environmental considerations into other sectors)

• An explicit focus on natural and organic farming, and on promoting millets, is positive for the environment, farmers and consumers, though there are no specific budgetary allocations for these as yet. Nor is it clear that the backward and forward linkages necessary to make such farming viable, including manure, markets, etc, have been considered. There is no mention of reserving this sector for small and marginal farmers, without which current trends towards big brands cornering the organic market may only be encouraged. Nor is there any focus on dryland and rainfed farming, which still employs a sizeable chunk of the farming population, and is ecologically more sustainable than artificially irrigated agriculture. And contrary to the FM’s declaration of promoting ‘chemical-free farming throughout the country’, allocation for chemical fertilisers remains extremely high, at Rs. 105,222 crores .. and ‘kisan drones’ will help spray chemicals from the air!

• Ropeways are proposed as alternatives to roads in ‘difficult hilly areas’. This is positive; however, compared to the massive increase in outlay for highways (see below), this appears to be tokenism.

• A ‘paradigm shift’ is proposed for sustainable urban living, for which a committee is being set up; and substantial support for public transport is proposed. We will have to wait to see what the committee comes up with, and what measures the govt. takes subsequently. Meanwhile, however, much of the public transport allocation appears to be for metros, which are extremely carbon intensive in terms of their construction. Support to electric vehicles (EVs) is also positive, but will mostly benefit rich consumers. There is no clear indication of a substantial boost to buses, cycling and walking, which the vast majority of urban residents would benefit from.

• Climate is explicitly stated to be a major focus of the budget. Steps like use of biomass for power stations, boost to batteries, Vande Bharat trains, energy efficiency measures in large commercial buildings, sovereign green bonds for reducing carbon intensity, and increase in renewable energy including for some of the massive increase in infrastructure, will help to some extent. However, this will be more than offset by the ‘business-as-usual’ approach for most of the economy (see below Point 3). Additionally, mega-parks in solar/wind energy, and nuclear power and large hydro as ‘clean energy’ sources, have their own serious ecological and people’s displacement issues, and reach the poor much less then needed. A focus on decentralized renewable energy with less ecological impacts and greater community access has been missed, and off-grid solar has seen a big drop in allocation. There is a welcome allocation for solar pumping for farmers.

3. Allocations to other sectors with implications for the environment

• The biggest push in this budget is for infrastructure (roads, railways, airports, etc). Much of this is for mega-projects, such as 81,000 crores more for the National Highway Authority of India, with very serious impacts on environment (and people’s livelihoods due to displacement and land acquisition). A chance to shift the paradigm to decentralized, community-oriented infrastructure especially for villages and small towns, has been missed. 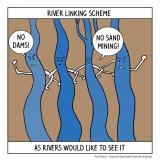 • The Ken-Betwa river linking project gets an allocation of over Rs. 40,000 crores, despite studies showing its severe negative environmental consequences including on tiger habitat. Five more linking projects will also be supported.

• Textiles have seen a major increase in allocation, with most of the outlay for big industry, which could have serious pollution impacts including toxic contamination of water and soil. A chance to shift significantly to decentralized, village and small town based production of textiles including handlooms, with much less environmental damage and much greater employment potential, has been missed.

• A substantial increase in allocation for the Deep Ocean Mission and on Blue Revolution has little or no focus on conservation, but rather on explorations for mining and extraction, with potentially serious ecological consequences.

• A significant increase in allocation for the Jal Jeevan mission is welcome in principle, but the fear is that much of the money will go for capital infrastructure like pipelines and taps, without reviving/ensuring the ecological and social conditions for water availability and quality, especially for marginalized sections.

• Oil palm has been given nearly 500 crores (interestingly, shown under the SC, ST and gender budgets!), and earlier govt. announcements had mentioned major plantation of this species in north-east India and Andaman Islands, both with serious ecological consequences of the kind already seen across South-East Asia.

• Programmes like MNREGS could have contributed substantially to green jobs, enabling both ecological recovery as also employment, but the scheme itself has seen a drop in allocation, and no clear orientation towards such jobs.

What is the absolute minimum the budget should contain?

Given the urgency and importance of safeguarding India’s environment for the sake of its immediate and long-term survival and security, the budget should have at least the following:

1. At least 4% of the budget should be allocated to environment sector, including much higher allocations to reduce and eliminate pollution of various kinds, support to communities for conserving ecosystems and biodiversity around them, incentives for decentralised and clean energy sources, strengthening of regulatory and monitoring institutions at all levels, and replacing wasteful and toxic products with ecologically sensitive ones.

2. At least 1% of the budget to support rural and urban communities to take steps for climate mitigation and adaptation, including building or sustaining climate-resilient livelihoods, settlements and living conditions, reducing risks, disaster preparedness.

3. Shift much of the investment in infrastructure away from mega-projects to localised, decentralised infrastructure including paths, roads, and communications for villages and small towns.

4. Provide substantial allocation to public transport, prioritising bus systems rather than metros, and dedicated cycle and pedestrian systems in all cities and towns.

5. To implement the stated intention of promoting ‘chemical-free agriculture throughout the country’, provide allocations for nationwide consultations and implementation measures to transition agriculture, including allied sectors, to organic, natural, and bioculturally diverse methods. This must also include plans for phased shifting of subsidies in chemical fertilisers to financial support for farmers using non-synthetic inputs, as also necessary support for manure, marketing, etc. This should in particular enable small and marginal farmers (and especially women amongst them) to sustain or rebuild food security and sovereignty based on local agroecological conditions, agrobiodiversity and knowledge.

6. Orient schemes and programmes on livelihoods towards green jobs, including the regeneration of India’s land and water sources and small-and-medium manufacturing (including crafts) based on natural resources, with special attention to this in the budgets for SC/ST and women, and for youth. This should also enable the reskilling of workers in polluting/climate-unfriendly activities like fossil fuels to transition to cleaner occupations.

7. Set up a process to consider establishing a Constitutionally mandated Environment Commissioner, for monitoring compliance of environmental laws, policies and norms by government and other agencies.

*Vikalp Sangam is a platform to bring together movements, groups and individuals working on just, equitable and sustainable pathways to human and ecological well-being. It rejects the current model of development and the structures of inequality and injustice underlying it, and searches for alternatives in practice and vision. Over 80 movements & organisations around the country are involved. For more information: http://www.vikalpsangam.org/about/

This article is originally Published at https://vikalpsangam.org/article/environment-and-2022-budget-amrit-kaal-or-vish-kaal/

The views and analysis contained in the publication are those of the author and do not necessarily represent the views of the foundation. Heinrich Böll Stiftung will be excluded from any liability claims against copyright breaches, graphics, photographs/images, sound document and texts used in this publication. The author is solely responsible for the correctness, completeness and for the quality of information provided.