India has entered a new age of hot extremes that will get worse if we fail to limit global warming.

India is searing. Large parts of the country are in the grips of unbearable heat and heatwaves. March this year was the hottest March on record, and March-April has witnessed a record number of heatwaves. Delhi has recorded eight heatwave days in April so far, and the maximum temperature in parts of the city has already hit 43-45 °C, which is 5-7 °C above normal. As a result, schools in the capital are struggling to maintain regular timings, and workers engaged in manual labour have practically stopped working during the daytime.

But it is not supposed to be like this in March and April; we should expect such heat in May and June – the year's hottest months. So, is this a freak year? Is this temperature anomaly unexpected? The answer is no.

Both temperatures and heatwaves have been increasing perceptibly since the 1980s. Each of the last four decades has been progressively warmer than the decade that preceded it. The past decade (2011-2020) was the hottest since records began in 1901, and 11 out of 15 warmest years were between 2007 and 2021. Likewise, the heatwave days have also increased every decade since 1980. In addition, the hotspots of intense heatwaves have expanded. They now engulf a large part of the country, hitting areas that were not prone to extreme heat events in the past, like Himachal Pradesh, Andhra Pradesh, Tamil Nadu, and Karnataka.

In fact, there has been an alarming increase in severe heatwaves in Southern India. The problem is that South India also experiences high humidity. This means that during the pre-monsoon period, when the humidity is usually high, a heatwave could push the "wet-bulb" temperatures (that measures the combined effect of temperature and humidity) beyond 35 °C, which few humans can tolerate for a long time because their bodies can’t cool themselves. Therefore, we have entered a new age of hot extremes that will get much worse if we fail to limit global warming. 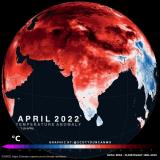 According to the latest report of the Intergovernmental Panel on Climate Change (IPCC),  the intensity and frequency of heat waves will increase with every increment of warming. For instance, at 1.5°C of global warming (we are at 1.1 °C presently), there will be more severe heatwaves and longer warm seasons; at 2 °C, “deadly” heatwaves would frequently cross the limits of human survivability. The report also points out that the Indian subcontinent will be hardest hit by deadly heatwaves. In a worst-case scenario, the number of "climatically stressful" workdays (when workers will have difficulty working outside) will increase to 250 per year. This means that for 8-9 months a year, there will be a severe impact on worker output, which will have a high cost on the economy. In essence, the IPCC reports point to heat waves becoming a major calamity in the coming years. The question is, what can we do about this?

First and foremost, mitigation is the best adaptation. Limiting warming to 1.5 °C will restrict the number, extent and severity of heat extremes. While the 1.5 °C target is becoming challenging every passing year, the latest IPCC report shows we have a small window of opportunity to meet this goal with rapid, deep and immediate GHG emission reductions in all sectors. The good news, as the IPCC report points out, is that several mitigation options, notably solar and wind energy, energy efficiency, the greening of urban infrastructure, demand-side management, improved forest and land management, and reduced food waste are cost-effective and are good for development and jobs.

Second, the urban heat island effect increases the severity of heatwaves. City centres are now a few degrees warmer than the hinterlands because of the large amounts of heat emitted from our buildings, roads, factories and cars. For example, while air conditioning cools inside, it throws heat outside, increasing the outside temperature. To combat outside heat, we are installing more and more ACs, thereby unleashing a vicious cycle of spiralling heat island effect. We can break this cycle only by building cities that cool itself. This means more open spaces, green areas and water bodies, and more energy-efficient green buildings. This leads to the third point.

Lastly, India needs a new heat code. Many regions of the country now experience wet-bulb temperatures exceeding 31° C during certain parts of the year, which is dangerous for manual labour.

We are building hothouses and not habitable buildings. Most modern buildings are built with too much concrete, glass and poor shading and ventilation, making them prone to overheating. Even the affordable houses that the government is building for the poor under the Pradhan Mantri Awas Yojana are not habitable on certain days of the year because they are too hot to live in. Many of these affordable houses will become unhabitable as the number of days with high temperatures increases due to global warming. Therefore, our building bye-laws, urban planning guidelines and construction technologies must be radically changed to adapt to the rising heat.

Lastly, India needs a new heat code. Many regions of the country now experience wet-bulb temperatures exceeding 31° C during certain parts of the year, which is dangerous for manual labour. However, we are not declaring such days as heatwaves because our guidelines are based on dry-bulb temperature. Therefore, we need a heat code that outlines the criteria for declaring heatwaves based on wet bulb temperature. It should also prescribe standard operating procedures (SOP) for heatwave emergencies, such as work-hour limits and relief measures in public places and hospitals.