Unpacking finance for Loss and Damage

Differentiating finance types, developing countries’ needs and the lessons from the Covid-19 pandemic

This series of three briefing papers seeks to raise awareness of loss and damage and the spectrum of policies and approaches to address them as well as advocate for greater financial support for addressing loss and damage in vulnerable developing countries.

Loss and damage has been defined as the impacts of climate change which are not avoided by mitigation, adaptation and other measures such as disaster risk management. It has both economic and non-economic costs and results from both extreme weather events like hurricanes and floods and slow onset climatic processes such as sea level rise, glacial retreat and salinization. Loss and damage includes permanent and irreversible losses such as to lives, livelihoods, homes and territory, for which an economic value can be calculated and also to non-economic impacts, such as the loss of culture, identity, ecosystem services and biodiversity, which cannot be quantified in monetary terms.

The three briefing papers highlight the need to make progress, both outside and inside the negotiations under the UNFCCC. Loss and Damage became officially recognized at COP 19 in 2013 after the catastrophic effects of Typhoon Haiyan (also known as Super Typhoon Yolanda) on the people of the Philippines made it apparent that vulnerable developing countries required significant levels of support in the face of such widespread devastation. In 2015, at COP 21, Loss and Damage was included as a distinct article in the Paris Agreement, separate from adaptation. This was an important milestone as developing countries have long stressed that loss and damage refers to climate change impacts that are “beyond adaptation”. 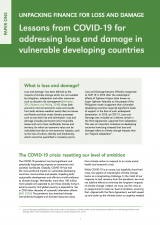 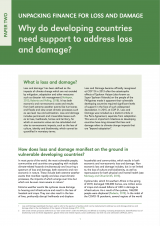 Why do developing countries need support to address loss and damage?

Though many countries are already incurring loss and damage - including high income economies - vulnerable developing countries remain the most vulnerable and exposed to loss and damage from climate change impacts. Briefing paper 2 in the series on unpacking finance for Loss and Damage looks at what vulnerable developing countries have identified as their needs in order to address loss and damage from the escalating impacts of climate change, such as adequate climate information services, risks and needs assessments as well financial tools to support social protection schemes.

The paper showcases that currently established initiatives are inadequate to address the scale and scope of the needs and urges more focus on approaches to address irreversible losses which cannot be recovered including migration and displacement – at all levels.  It argues that work under the UNFCCC must focus on addressing loss and damage without delaying mobilizing financial resources by focusing instead on averting and minimizing loss and damage. 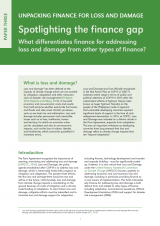 Briefing paper 3 in the series of unpacking finance for Loss and Damage looks at the inadequacy and unsuitability of existing financing streams for sustainable development, adaptation or humanitarian assistance in the face of disasters to address loss and damage from climate impacts explicitly, highlighting the lack of a dedicated financing mechanism. Given the enormous – and rapidly growing –cost of loss and damage in developing countries alone, continuing to burden those the least responsible for and the most vulnerable for climate change with these costs is not only a matter of grave injustice, but will rob them of the ability to enjoy their most basic human rights, including the right to development and a decent livelihood for themselves and future generations.

The paper argues that in order to ensure a safe and resilient world, support for Loss and Damage must be scaled up significantly in addition to the fulfillment of promises to ensure balance between mitigation and adaptation and provide support for adaptation inscribed in the UNFCCC and its Paris Agreement. This support must be provided in the form of grants such that addressing loss and damage does not violate their human rights, increase the debt loads and poverty levels of people, communities and countries already coping with multiple crises simultaneously.