To ensure economic security, India must implement an unconditional basic income for every citizen as a matter of right.

Basic income is cash paid to every woman, man and child individually, unconditionally, and every month in any given political community. It is a simple idea, but indeed a radical new paradigm. It has five core elements that distinguish it from the conventional modes of welfarism. Here are the characteristics:

While the first four elements are more common, the most radical element in the basic income paradigm is ‘unconditional’. It is an entitlement and a right. One need not provide evidence that one is deserving or qualified to receive a basic income; nor is one asked to demonstrate certain outcomes in order to continue receiving it. It is as unconditional as the air we breathe and rain we receive.

A basic income system is increasingly becoming a necessity in every country today. In the Global South, the pursuit of economic growth forces every country to participate and thrive in the global marketplace. In the process, the business and employment models adopted are increasingly becoming similar. One example of this is the rapid rise of gig jobs or temporary jobs as opposed to stable and long-term employment. The insecurity that results from this trend is severely affecting people in all countries – rich or poor. India is no exception. In fact, India needs a basic income much more urgently than any other country, given the size of its workforce.

In the OECD (Organisation for Economic Cooperation and Development) countries, universal basic income (UBI) is being discussed and prescribed in the context of the threat of automation and technological unemployment. According to an assessment conducted by McKinsey’s Global Institute in 2017, in the UK and four major economies in Europe (France, Germany, Italy and Spain) there are as many as 60 million fulltime employee equivalents that are associated with automatable activities in different sectors[i]. The prevailing welfare systems in these countries are not equipped to deal with a potential calamity on this employment front. In the face of such a gloomy future, several politicians, academics and activists in Europe are considering UBI as a policy option. While several pilot studies are underway in Europe and UK, even popular support to UBI has been increasing during the last five years. A recent poll conducted in six European countries – Germany, Spain, Portugal, France, Italy and Poland – by an independent organisation called WeMove Europe revealed that nearly two-thirds of the respondents supported UBI as a measure to be adopted[ii].

In India, however, basic income is being discussed not so much with respect to automation and technological unemployment, but as an alternative to the current measures adopted by the government to reduce poverty. I will now lay out the context and discuss the worrying issues with the current social protection system, and pathways to potential resolution.

Over the years, since Independence, there have been fragmented and sporadic efforts to address social protection issues of these workers in certain occupations such as beedi[v]rolling workers, contract workers, garment workers, construction workers and so on, but their implementation has been piecemeal and tardy. So, in terms of protecting workers in the informal sector, the government’s footprint is extremely limited. The onrushing neoliberal impulse across the world has its resonance in India too and it is likely that the regulatory role in the case of labour protection will erode further. If the series of labour codes[vi] enacted in 2020 by the Government of India is anything to go by, we are looking at a future where all employment is likely to become temporary, insecure and precarious in nature[vii]. Increasing the maximum permitted number of working hours in a day from 8 to 12 is to provide greater flexibility and elbow room to the employers. It is evident that these measures are meant to attract global manufacturers and providing them ‘ease of doing or closing businesses’ by way of offering flexible employment arrangements and working hours. In effect, employment is going to be more and more precarious in future.

People as subjects and beneficiaries

Then, government measures also address people as subjects or beneficiaries through welfare measures of both the central and state governments that are innumerable in number. Two important flagship programmes run by the central government, which take the lion’s share of welfare spending are the national food security programme and national rural employment guarantee programme. Then, there are also other programmes like free midday meals for children studying in government schools, nutritional supplements to pregnant women, bicycles to rural high school girls and sarees to poor women during festival season. There are also strictly targeted and modest cash transfers such as old age, widow and disability pensions and scholarships to students of backward castes. During the pandemic, the central government and several state governments have implemented one-time cash transfers to poorer households, farmers and migrant workers[viii]. Despite the fact that in the recent years, governments are finding targeted cash transfers easier to administer, the in-kind transfers have always been the bedrock of India’s welfare thinking.

Given the fact that bulk of India’s welfare spending is in-kind in nature, there are two problems that have been endemic to the system. One, while the allocations look impressive on paper, and in fact have been increasing over the decades, the track record of delivery has been extremely poor. A 2015 study by the Indian Council for Research on International Economic Relations (ICRIER)[ix] concludes: “…at an all-India level, 46.7 per cent or 25.9 million metric tonnes of the off-taken grain did not reach the intended PDS[x] beneficiaries in 2011-12; that the leakages are more than 40 per cent of the grain that is transferred[xi].”

The study further argues that the system works relatively better in better off states, but the leakages are extremely high in states where India’s poor live in large numbers such as Bihar, Uttar Pradesh, Jharkhand and Madhya Pradesh. The grain procurement and distribution system is riddled with inefficiencies and corruption. One, there are both inclusion and exclusion errors in the process of identifying beneficiaries, that is, many people who are eligible are excluded and many people that are not eligible are included. Two, there are transmission losses, that is, corruption at different levels causing diversion of food grains to the open market.

On the other hand, there are strong apologists of this system who believe that the system can be reformed.  For instance, economist Jean Dreze and his colleagues argue, based on a survey they have conducted in 2017[xii], that since the enactment of the food security law – National Food Security Act – in 2013, “… important gains have been made, including broader coverage, lower targeting errors, accelerated PDS reforms, and greater political commitment to food security.” The Right to Food campaign, which has played an important role in bringing about the NFSA 2013, also argues that the PDS system can be improved.

The second problem with the PDS system is its administrative costs. Enormous government machinery is involved in administering and delivering the grains. According to an assessment made by the Government of India in 2005, to deliver one rupee of welfare to intended beneficiaries, the government spends more than Rs.3[xiii]. In the last ten years, the government has begun to address these endemic problems, though with limited success.

What do these developments tell us? While basic income is a global idea, it is only in the local political context that it gets its flesh and bone. This evolves from the ongoing discussions. In the case of India, it has become part of the ongoing discussion about poverty alleviation. What is encouraging about the Indian discussion is that the notions of ‘unconditional’ and ‘cash’ seem to be gaining currency, which are much against the conventional ‘policy common sense’.

What then are the prospects of basic income being implemented in India? The 2020 pandemic has exposed how vulnerable a large section of the Indian population is. It has also exposed the bankruptcy of the current welfare system in terms of caring for people in a difficult time. In a dismal context like this, once again there is new discussion about introducing a basic income system. There are good chances that in the next decade or so, we will see a basic income system implemented in India. However, it is more likely that the initiatives will come from the state governments rather than the central government.

Basic income and people as citizens

Basic income gives choice to people. It treats people as citizens who have rights and capacity to exercise their agency. The current system of social protection in India treats people as passive subjects or beneficiaries. The design of poverty alleviation programmes in India smacks of paternalism. It reflects policymakers’ perceptions of the poor as passive recipients rather than as active citizens. It is ironical that we trust our people to elect their governments, but do not trust them to make right choices for their own lives.

[vi]Specifcally, the The Occupational Safety, Health And Working Conditions Code, 2020.

[x]Public Distribution System is the delivery system that implements the provision of subsidised food grains to the poorer households under National Food Security Act 2013.

[xvii]In this region, in a year there are two main cropping seasons, which mean each farmowner got Rs.10,000 per annum (Euro 114). 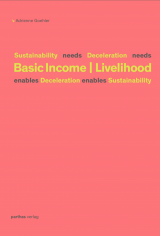 This English publication by Adrienne Goehler deals with the mutual relationship between sustainability, basic income and collective deceleration. The work shows that in the discourse on transformation and sustainability in the fight against the constantly advancing climate change, a systematic integration of the issues of social inequality and the global creation of decent livelihoods are absolutely necessary.