Teaser Image Caption
The deserts of Rajasthan have long been known for their spare beauty and their intense sunshine. Now that sun is being turned into a surge of solar power expansion that may one day power not just Rajasthan but a wide swath of India with clean energy. Photo by: Jitendra Parihar/Thomson Reuters Foundation

The energy transition from fossil fuels to renewable energy is a significant part of India’s climate response. In a COVID-19 ravaged world, when - countries worldwide are looking inwards, protectionism is the order of the day and new developments are delayed, does the renewable energy sector still hold it’s promises of the past?

Significant strides in the sector of Renewable Energies notwithstanding, the Government of India recently announced the launch of an auction process for 41 coalmines for commercial mining1 . The launch of the auction process is said to “unlock the coal sector from years of lockdown,” achieve self-sufficiency and boost the industrial, and likewise economic development of the country. Most of the proposed coalmines are located in biodiverse rich regions of the country. In the Paris agreement of 2015, India pledged to reduce its greenhouse gas emission intensity by 33-35 percent (below 2005 levels) by 2030. It also pledged that 40 percent of its power capacity would come from non-fossil fuel sources. The announcement of the coal auction thus, undermines the intentions of the government that prides itself in being a frontrunner in clean energy to combat climate change.

The coalmines auction in resource rich regions of the country also endangers the indigenous people inhabiting these locations. The auctions have opened doors for big private players to venture into commercial coal mining while local communities will suffer the consequences of displacement, loss of livelihoods, carbon emissions etc.

While, it is clear that the coal mining and coal-fired power plants lead to air pollution, consume disproportionate quantities of water, ecological degradation and other severe environmental and public health impacts, the challenges within the Renewable Energy sector have also started surfacing. There have been recorded instances where largescale wind and solar projects have begun to face opposition from communities on the ground and from environmental advocates. While there is wide spread acceptance that the energy transition is required and urgent, there is also a concern that renewable energy projects - especially large-scale projects - could have an adverse impact on the ground in terms of social and environmental parameters.

The report "Powering Ahead – an assessment of the socio-economic and environmental impacts of large-scale renewable energy projects and an examination of the existing regulatory context" was prepared by Asar Social Impact Advisors Pvt. Ltd. On July 3rd, 2020, the report was presented to the public, followed by a panel discussion between an array of experts from the renewable energy sector. The findings of the report and the discussions that ensued highlighted the need for decoupling the impacts of large scale solar and wind power projects as the nature of impacts vary from solar to wind.  During the panel discussion, (see link below) Renewable energy expert and CEO of iFOREST Chandra Bhushan remarked that the challenges with wind power plants are more obvious in terms of bird collisions and effects on the flight zone of migratory birds thereby altering the ecology of the area where they are deployed. Moreover the availability of often large tracts land and land use change is a major issue with solar power plants. With arable land availability per person as low as 0.29 acres and an average population density of 382 persons per square kilometer, land procurement is a mammoth challenge in a country like India. The majority of the population is depending on land for ensuring their livelihoods, which also makes the acquisition of land a prolonged and often a conflict-ridden process2 .

Currently the renewable energy projects, both wind and solar do not carry impact assessments (environmental and social) and are exempt from obtaining Environmental Clearance in India. That such projects will have no impacts on the ecology and the livelihoods of the people without carrying an impact assessment, is erroneous to assume and highlighted by the current debate around the amendments to the procedure for Environmental Impact Assessments overall. Mandatory assessments are therefore important as preemptive strategies to avert possible impacts of the project on human lives as well as wildlife. Similarly, Environmental Clearance must be mandated for largescale Renewable Energy projects, which should ideally include conditions on management and proper disposal of hazardous waste as well as conditions on water usage etc.  Several other recommendations for policy improvement in the Renewable Energy sector were discussed by the panel and highlighted in the report. For a just, equitable and sustainable energy transition, it is of paramount importance that adequate regulatory mechanisms are put in place, the needs and rights of people are considered and stakeholders are held accountable. Lest, in a rush to transition from fossil fuels we repeat the mistakes which are irreversible and be borne heavily by people and environment.

Please follow this link to view the Panel Discussion online 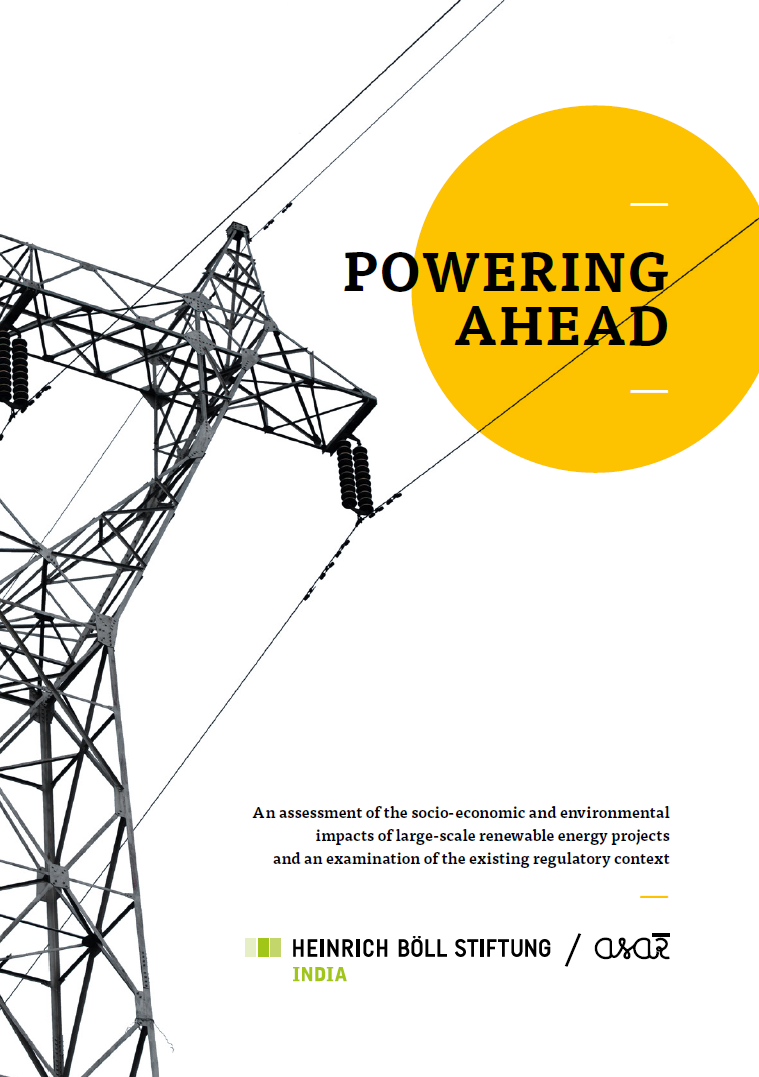